Induction hardening is a form of heat treatment in which a metal part is heated by induction heating and then quenched. 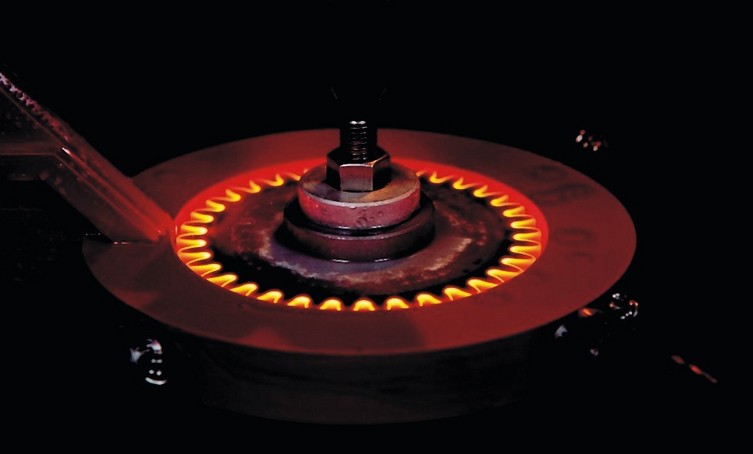 Induction heating is a non-contact heating process which utilizes the principle of electromagnetic induction to produce heat inside the surface layer of a work-piece. By placing a conductive material into a strong alternating magnetic field, electric current can be made to flow in the material thereby creating heat due to the I2R losses in the material. In magnetic materials, further heat is generated below the curie point due to hysteresis losses. The current generated flows predominantly in the surface layer, the depth of this layer being dictated by the frequency of the alternating field, the surface power density, the permeability of the material, the heat time and the diameter of the bar or material thickness. By quenching this heated layer in water, oil, or a polymer-based quench, the surface layer is altered to form a martensitic structure which is harder than the base metal.

Carburizing or carburization is a heat treatment process in which iron or steel absorbs carbon while the metal is heated in the presence of a carbon-bearing material, such as charcoal or carbon monoxide.

Carburizing or carburization is a heat treatment process in which iron or steel absorbs carbon while the metal is heated in the presence of a carbon-bearing material, such as charcoal or carbon monoxide. The intent is to make the metal harder. Depending on the amount of time and temperature, the affected area can vary in carbon content. Longer carburizing times and higher temperatures typically increase the depth of carbon diffusion. When the iron or steel is cooled rapidly by quenching, the higher carbon content on the outer surface becomes hard due to the transformation from austenite to martensite, while the core remains soft and tough as a ferritic and/or pearlite microstructure.

This manufacturing process can be characterized by the following key points: It is applied to low-carbon workpieces; workpieces are in contact with a high-carbon gas, liquid or solid; it produces a hard workpiece surface; workpiece cores largely retain their toughness and ductility; and it produces case hardness depths of up to 0.25 inches (6.4 mm). In some cases, it serves as a remedy for undesired decarburization that happened earlier in a manufacturing process.

Quenching is the rapid cooling of a workpiece to obtain certain material properties. A type of heat treating, quenching prevents undesired low-temperature processes, such as phase transformations, from occurring.

Quenching is the rapid cooling of a workpiece to obtain certain material properties. A type of heat treating, quenching prevents undesired low-temperature processes, such as phase transformations, from occurring. It does this by reducing the window of time during which these undesired reactions are both thermodynamically favorable, and kinetically accessible; for instance, quenching can reduce the crystal grain size of both metallic and plastic materials, increasing their hardness.

In metallurgy, quenching is most commonly used to harden steel by introducing martensite, in which case the steel must be rapidly cooled through its eutectoid point, the temperature at which austenite becomes unstable. In steel alloyed with metals such as nickel and manganese, the eutectoid temperature becomes much lower, but the kinetic barriers to phase transformation remain the same. This allows quenching to start at a lower temperature, making the process much easier. High speed steel also has added tungsten, which serves to raise kinetic barriers and give the illusion that the material has been cooled more rapidly than it really has. Even cooling such alloys slowly in air has most of the desired effects of quenching.